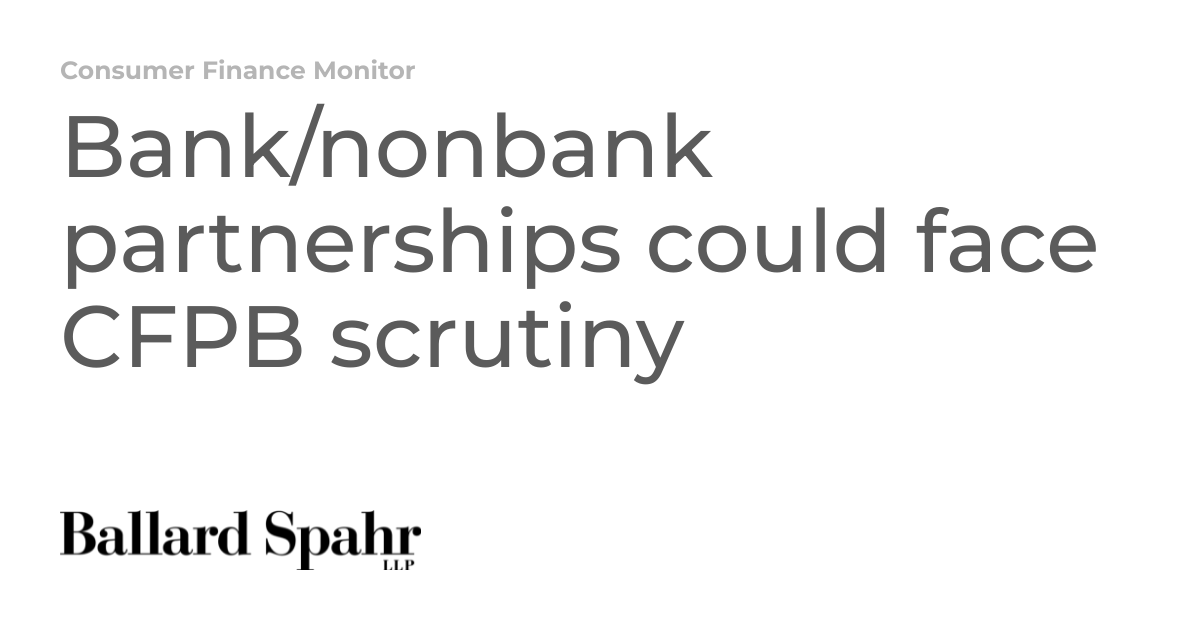 Assistant manager Martinez said that “[s]some lenders attempt to use [relationships with banks] to evade state interest rate caps and licensing laws by pretending that the bank, rather than the non-bank, is the lender. She said “lenders employing bank leasing programs have unusually high default rates, raising questions about whether their products fail borrowers.” She said the CFPB’s consumer complaints database “reveals a range of other significant consumer protection issues with certain loans associated with banking partnerships.”

To date, the CFPB’s enforcement action has only raised “renting a charter” issues in the context of tribal lending, notably in its enforcement action against CashCall. The CFPB lawsuit broke ground by alleging UDAAP violations based on CashCall’s efforts to collect loans allegedly void in whole or in part under state law. The CFPB complaint alleged that the loans in question, which were made by a tribal-affiliated entity, were void in whole or in part under state law because, based on the substance of the transactions , CashCall was the “de facto” or “true” lender and as such charged excessive interest and/or failed to obtain the required license.

The district court agreed with the CFPB that since CashCall was the “true lender” on the loans, the tribe affiliated with the loans did not have a sufficient relationship with the loans for the court to enforce the tribal choice provision. of the law in loan agreements. and there was no other reasonable basis for the choice of tribal laws. As a result, the district court found that CashCall engaged in a deceptive practice within the meaning of the CFPA when servicing and collecting the loans by creating the false impression that the loans were enforceable and borrowers were obligated to repay. loans in accordance with the terms of their loan agreements.

On appeal, the Ninth Circuit ruled that the district court was correct in refusing both to give effect to the choice of law provision and to apply the law of the borrowers’ home states, thereby resulting in the invalidity of loans. He characterized the role of the tribal entity in the transactions as “economically non-existent” and having “no purpose other than to create the appearance that the transactions had a connection to the tribe”. According to the Ninth Circuit, “the only reason the parties chose to [tribal] right [in the loan agreements] was to pursue CashCall’s plan to avoid state usury and licensing laws.

It should be noted, however, that the Ninth Circuit expressly rejected the use of a “genuine lender” theory as the basis for its decision. In response to CashCall’s objection to the district court’s finding that it was the “true lender” of the loans, the Ninth Circuit said that “[t]To the extent that CashCall invokes cases involving banks, we note that banks present different considerations because federal law prevents certain state restrictions on the interest rates charged by banks. Commenting that “[w]We do not consider how the result here might differ if [the tribal entity] had been a bank”, the Ninth Circuit said that “we need not employ the concept of ‘genuine lender’, much less establish a general test for identifying a ‘genuine lender’. “In his view, for the purposes of the choice of law issue, it was sufficient to consider the “economic reality” of loans which “reveal[ed] that the tribe had no substantial connection to the transactions.

More importantly, the Ninth Circuit rejected CashCall’s argument that a finding of deceptive practice under the CFPA could not be based on deception about state law. He found no support for the CFPA’s argument and noted that while the CFPA prohibits the establishment of a national attrition rate, the CFPB had not done so in Call for funds because each state’s usury and licensing laws still applied.

Ms. Martinez’s comments raise the possibility that the CFPB is now trying to use the UDAAP outside the tribal context to challenge non-banks involved in banking partnerships alleging violations of state usury and laws on licensing based on the theory that the partnership is a “rent-banking scheme. However, since many of the banks involved in such partnerships are smaller banks over which the CFPB has no authority supervisory or enforcement (i.e. banks with $10 billion or less in assets), the CFPB should manage potential concerns that the FDIC, the primary federal banking regulator, may have if the CFPB had to challenge such partnerships.

Non-bank/bank partnerships are currently under siege in several directions. Four Democratic members of the California state legislature recently sent a letter to the FDIC urging the agency to take action against FDIC-supervised banks that partner with non-bank lenders to offer installment loans. at high cost. On June 1, 2022, a class action lawsuit was filed against fintech lender Opportunity Financial, LLC (OppFi) in a federal district court in Texas in which the named plaintiff alleges that OppFi engaged in a “rent- a-bank” with a state-chartered bank to provide loans at rates higher than allowed by Texas law. OppFi is also engaged in litigation in California state court where the California Department of Financial Protection and Innovation is trying to apply California usury law to loans made under the partnership of OppFi with a state-chartered bank alleging that OppFi is the “true lender” on the loans.